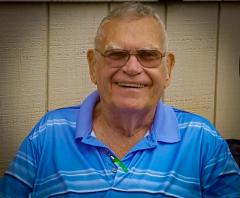 LeRoy went to Norman Bridge Elementary School in Chicago, Il. His favorite subject was mathematics and he liked to play baseball and football.  He went on to Steimnetz High School in Chicago.  He met the love of his life Elaine while attending an after prom outing at Druce Lake.  He saved Elaine from drowning in a whirlpool. They dated after that until they were married Sept. 29th, 1956.
In 1953 LeRoy started working on the Milwaukee Railroad at age 17.  He started by shoveling coal on a 5-3 steamer.  He made overnight trips to Savannah, IL and worked in the switching yards in both Bensenville, IL, and Western Avenue – Chicago, IL.  After 44 years of railroading, he retired in 1997.
In 1958 LeRoy was drafted into the Army and served in Korea and finished his tour of duty at Fort Riley Kansas in March of 1960.

Throughout the years, Leroy and Elaine enjoyed camping with their family in their tents, travel trailers, and motor homes.  They belonged to the Windy City Ramblers and the Newmar Trailer Clubs.  He loved traveling with the grandchildren.  LeRoy and Elaine eventually became full time winter Texans traveling to and from Trophy Gardens in McAllen, Texas.

LeRoy and Elaine loved animals including their goldfish, a rabbit, a wire hair fox terrier and two St Bernards.  They enjoyed training in obedience and showing the St. Bernards.

In 1982 LeRoy joined the Elmhurst Masonic Lodge #941.  Went up the line and became Worshipful Master in 1988.  LeRoy was a member of the Scottish Rite and Medinah Shriners.

Our family hopes you will be able to join us at those times to remember him and all the lives that he touched.

Dad, you will forever be in our hearts.

To order memorial trees or send flowers to the family in memory of LeRoy Freitag, please visit our flower store.
Send a Sympathy Card