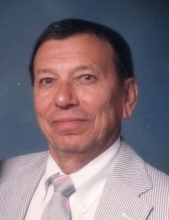 Anthony Scafidi, 92, left us suddenly on July 21, 2018 surrounded by love.
Anthony was born in Chicago IL to Mary and Frank Scafidi on August 9, 1925.
He married Ann Spanczak on May 6, 1950 in Chicago IL.
For over 30 years, he worked as a truck driver for K&R Deliveries and was a member of the teamster union.
Anthony was a veteran of WWII. While serving in the Army he was wounded and taken prisoner of war, for which he receive a purple heart.
Anthony is survived by his wife Ann Scafidi, daughter Deborah Robison (Arthur), son Frank Scafidi, brother Phillip Scafidi (Rose), Grandchildren Christopher Robison (Lisa) and Shelly Donahue, Great-grandchildren Sydney Robison and Jacob Robison.
If you would like to make a donation in honor of Anthony, his family requests donations be made to following charities:
Wounded Warrier Project
National Federation of the Blind

To order memorial trees or send flowers to the family in memory of Anthony Scafidi, please visit our flower store.