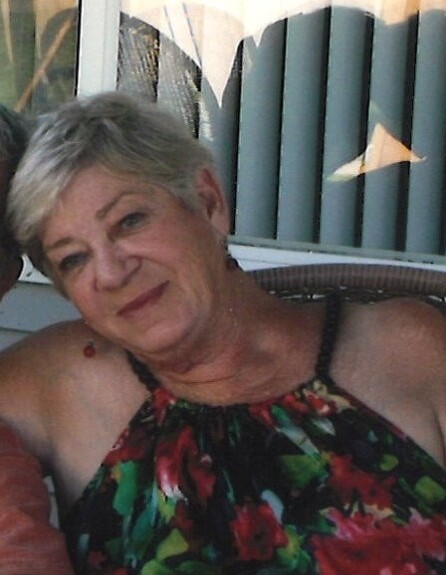 Carol was born in Chicago and grew up around Wells and Ashland in the city.  Her family lived in the Mother Cabrini projects for several years before spending some time in Upper Michigan, where her mother was born.  Later they lived in northern Illinois, and finally moved back to Chicago, living in the Belmont and Southport area.

Her dad was a printer, and as a young teen Carol would sometimes go to work with him to learn his trade.  She thought she would be a printer.  She worked at the soda counter in Woolworth on Ashland near Belmont, and later got a job at the First National Bank of Chicago, in the Loop.  Her husband John met her when he got a job there, after coming back from Germany.  They met in the bank's choral club.  After dating for about a year, they got married in January of 1966.

Carol moved from Chicago in 1975 with her husband, Lopey, and three small children to Franklin Park, where she would live for the next 45 years, until her passing.  That is, except when she wasn't taking her grandchildren, Hunter and Morgan, on some unscheduled adventure to another state or visiting her son Tony wherever he happened to be in the world at that time.

After leaving the bank she worked for a record distributer for a few years.  She also worked as a waitress at a restaurant on Pulaski near Lawrence and at the JoJo's restaurant on Mannheim near Irving in Schiller Park.  For several years she worked at Porter Equipment in Schiller park. They're the company that makes backboards and padding, and other sporting equipment, used around the world.  She worked a number of jobs, including cleaning offices, to help the family, and finally retired in the late 1990's as she wanted to take care of her grandkids while her daughter Kim and her husband were working.

While at Porter, she once blocked basketball legend Magic Johnson from talking with her boss because he didn't have an appointment.  Her boss had to explain who Johnson was before Carol would let him through, as she had never heard of him.  If you've ever tried to change her mind on something, you know how difficult a task Mr. Johnson was facing.

Her biggest job, she would argue, was raising her three children and taking care of her grandchildren, as well as helping raise the dozens of foreign exchange students who stayed at her home for anywhere from a weekend to a year.  Her guest-family extends across 5 continents, with many adults who at one time called her "Mom", and some who still do.

Carol loved to make her yard look nice, for all the passers-by to see and enjoy.  She was a ravenous reader, going through paperback novels by the bagful.  She loved popcorn and salami.  She was renowned as much for rarely forgetting to send a card or letter for someone's birthday or anniversary as she was for the beautiful handwriting she wrote them with.  You knew that she liked you if she played a small prank on you.  She was quick to support people, and slow to forget mistreatment, especially when it was done to someone vulnerable.

Above all, she supported children.  She insisted that every child be treated well, particularly those who she perceived were lacking in attention and love.  She encouraged her children to bring over their friends and spent time cooking for them, and making sure they felt safe at her home.  She treated many of her children's friends as her own, giving them praise when they needed it, as well as chewing them out when they deserved it.  As she grew older, the next generation of neighborhood children came to know her as Grandma Carol, Grandma Lulu, Grandma Lopey, and that lady with the animal decorations in her yard.  Even with her children grown up and no longer living with her, she kept toys at home for any child who happened to visit with their parents, who often left with a new toy to call their own.

She will be remembered as someone who did . not . stop.  Be it cooking a complete meal, cleaning the attic, helping someone with yard work, wanting that wall knocked down in the dining room, buying and wrapping gifts well before they were to be delivered, pulling out the dead grass from her lawn by hand, sewing another patch on those jeans someone else just wasn't ready to throw away yet, or shoveling snow with broken ribs - if the job wasn't done then she wasn't done doing it, for better or worse.

In her later years she would spend her time making sure the local feral cats had food and shelter (and got fixed), making even more multi-colored jello desserts to deliver to anyone she liked, continuing to call friends and family with an "Oniongram" on their birthdays and anniversaries, and handing out the vegetables she grew in her yard as there were too many for just her and Lopey to eat.

And she never stopped working in the yard, and never passed up an opportunity to say hello to a young face that walked by.

A public wake will be held on Sunday December 6th, 2020 at 3-9pm at Sax-Tiedemann Funeral Home, maximum 10 people inside at a time.  On Monday a procession will leave Sax-Tiedemann's at 11am and pass by Carol's home at around 11:15am, followed by a private burial for her family.

To order memorial trees or send flowers to the family in memory of Carol Lopez, please visit our flower store.