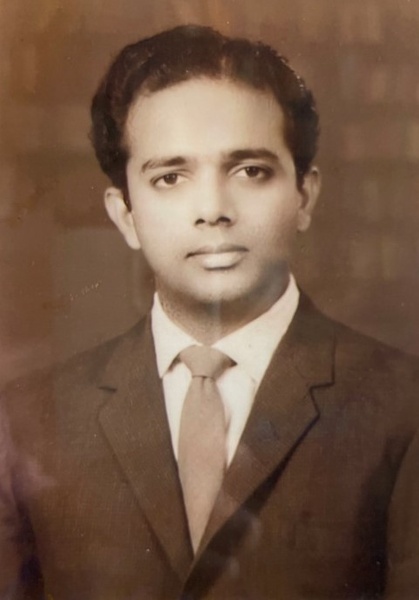 Dr. Lakdas Ananda Wickremeratne’s life began just before the end of colonial rule in Ceylon and the birth of what is now known as Sri Lanka.  He was born in Ceylon in 1935 in its ancient capital of Kandy.  His father, H.A.C. Wickremeratne, objecting to British rule, was imprisoned by the British until Lord Mountbatten intervened and saved his life.  His mother’s family had lived in Kandy for 1,400 years.   He was born to be the historian he would become.
Ananda earned a Commonwealth Scholarship and University Scholarship to Oxford University where he finished his D.Phil in less than 4 years.  He then earned a Fulbright Scholarship to teach at Harvard University.
Dr. Wickremeratne moved to the Midwest where he taught at Northwestern University and Loyola University.  It was in this capacity that he inspired hundreds of young lives in lecture rooms that were typically packed beyond capacity with students who knew him affectionately as “Dr. Wicks.”  His sense of humor, gentleness and kindness enabled him to connect with his students, making him a beloved figure among many generations of young people. He was also a consultant to the United States Department of State.
The Oxford trained historian’s work on the causes of the ethnic conflicts that define much of Sri Lanka’s post-independence history, conflicts which gave birth to the first suicide bomber, is widely regarded.  Among his central works are The Roots of Nationalism: Sri Lanka, and Buddhism, and Ethnicity in Sri Lanka; A Historical Analysis.   The Genesis of an Orientalist: Thomas William Rhys Davids in Sri Lanka, is a masterclass of historical writing where thorough research and inquiry is delivered in beautiful prose by an engaging  storyteller.  His work also includes numerous articles for compendiums including, The Sri Lanka Reader; History, Culture, Politics published by Cambridge University Press, and O ye Buddhist Monks in Sri Lanka: A Plague Upon Thy House!
Dr. Wickremeratne’s last book, a promise to his mother, and a relative of Anagarika Dharmapala, was a biography.  Dharmapala is credited with bringing Buddhism to Europe and North America, and for the revival of Buddhism in Sri Lanka and India, where it was almost lost due to the work of Christian missionaries. Sadly, this work was left in his daughter’s hands, unfinished- Alzheimer’s preventing its completion.
Ananda Wickremeratne was a devoted father to two children, and a loving husband. He lives on in the many lives he has touched, and a world left better by his presence.

To order memorial trees or send flowers to the family in memory of Dr. Lakdas Wickremeratne, please visit our flower store.