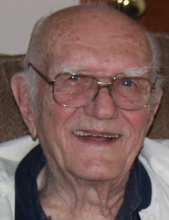 He is preceded in death by his parents, Adam and Anna (Fedro) Kutta and his brother, Don (Carol).

Born and raised in Chicago, Ed was an accomplished accordion player. In the 40's and 50's, he played in several bands before going solo in the 60's and became a well-known Polka player throughout the Chicago area. In addition, throughout the years, Ed taught music, he was a DJ at Polish radio station WOPA and a cameraman at ABC-TV, where he retired from in 1990.

Ed served in the U.S. Military during World War II. As a guard, he often played the accordion to entertain the German prisoners.

After he retired, Ed continued to entertain as part of a musical duo, "Young at Heart", playing variety shows throughout the Chicagoland area and, during the winters, in Florida. Ed enjoyed telling jokes, watching old movies and sports, politics, going out to dinner, the Cubs and sipping a Manhattan.

A service will be held on Thursday, August 15 at 2:00 pm at Abraham Lincoln National Cemetery in Elwood, IL.

The family would like to thank the wonderful staff at Brookdale Prospect Heights and Kindred Hospice for the care he was provided during his final months.