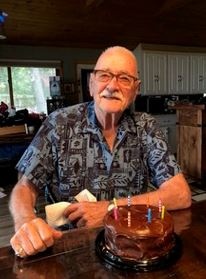 Passed away peacefully surrounded by his family on February 25, 2020.


Jim was born on July 15, 1930, in Chicago, IL. to George and Esther Wagner.  He had an older brother Vern and a younger brother Jerry.  He married Sence Ann O'Brien when he was 19 years old. Shortly after, he was drafted into the Marine Corp and was a Sergeant working as a radio operator serving overseas in the Korean War.  He served for 2 years and then returned home to Chicago.  In 1954, he and his wife purchased their first and only house they ever owned in the western suburbs.  Jim worked as an electrician as his career and eventually retired from Walgreens.


It was when his eldest son started playing little league baseball that he started coaching. He absolutely loved coaching and was known as Sarge.  Even after his son was no longer playing baseball, he continued to coach and umpire. In fact, for 53 years!  It was because of his devotion to Westdale Baseball and the impact he had on so many lives, they named the former Joyce Park to Coach Jim Wagner Park in 2012.  What an honor that was for him.  He also coached basketball and hockey.

Besides his love of baseball, he loved his family.  His life revolved around going to all his grandchildren's events, sporting and otherwise.  Every one  knew that Gramps would always be there for them.  Jim and Sence had their trailer parked on Mason Lake in Wisconsin.  He also loved fishing and shared that love with his grandchildren.  He had a bass boat that he would take the grandkids out skiing and tubing.  They all have such wonderful memories there with campfires, s'mores, and fish fries.
His family will certainly miss him, but he is forever in their hearts.

Family and friends will gather at Sax-Tiedemann Funeral Home Tuesday, March 3, 2020 from 6:00 pm until 9:00 pm to celebrate Jim's life.

In Lieu of flowers/gifts, please donate to the Alzheimer's Association in honor of James A. Wagner. https://act.alz.org/site/Donation

To order memorial trees or send flowers to the family in memory of James Wagner, please visit our flower store.