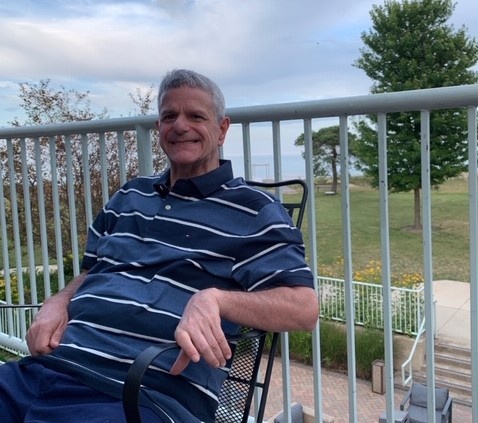 John is the beloved son of (the late) John and (the late) Mary Spudic and the cherished brother of (the late) Rita Dusza, Tom Spudic, and Mary Kay Lichtman.
He is also mourned by his sister-in-law, Linda Spudic, and his brother-in-law, Joe Lichtman, as well as many others who got to know and love him.
John is an extraordinary person who is difficult to describe in a few words.
John had a significant developmental disability (Autism) about which little was known at the time of his birth. Considered extraordinarily rare, his parents expended great effort to find ways to help him. There were no services available for his level of disability at the time that he was born. John did not go to school until age 9, and his father drove him one and a half hours each way to go to a private school (parent run) in Waukegan. His parents later helped to form the Jeanine Schultz memorial school. They were instrumental in pushing legislation providing educational services for all children. Their efforts were stressful and difficult, but, they were also an early force in forming the Ray Graham Association. John resided at the Ray Graham SLC from 1980 until 2020. Totally mute until age 3, he shocked his family by showing that he was able to read. He received no instruction in reading whatsoever, based on the face that the family did not know that he could talk!
During recent years he blossomed, going on an incredible number of outings and developing and addiction to The Raging Bull, Superman, and other thrill rides at Great America! Possessing an iron stomach, he could go on numerous roller coasters then say it was time for "lunch". He could recognize the name, model, and year of every automobile on the road. He loved game shows, enjoyed watching sports, and in later years, rarely missed an episode of Meet the Press.
His most treasured possession was his dictionary. It was a bad idea to pick up his dictionary.
John made great progress during his 40 years of residence at Ray Graham SLC. That was due to the extraordinary efforts of the wonderful staff members at the SLC, most especially Pam Bruce, but also many, many others of every race and color, they simply cared for him as a person. They became a part of his family, and of ours. Words can not express our gratitude!

John taught us at least things: we are all the same under the skin, never judge a book by it's cover, and, love can accomplish extraordinary things.

To order memorial trees or send flowers to the family in memory of John Spudic, please visit our flower store.