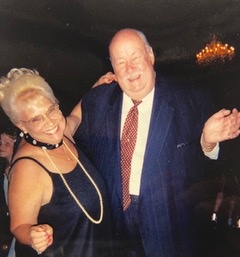 Leslie Maxwell (“Max”) Scott II came into this world on the same night that Thomas Alva Edison went out of this world. October 18, 1931.  They both knew how to light up a room.

Max was born at Quincy, Illinois, the second child and first son of Leslie Maxwell Scott and Verla Benscoter. His people were of Scots-Irish and Pennsylvania Dutch heritage.  He spent the best part of his childhood at West Ridge, Illinois.  Three houses and a railroad station atop a slight ridge along the railroad between Tuscola and Villa Grove, Illinois.  His father managed the grain elevator, depot, and general store. As a young man his passion was fast horses.  His father bought them and he raced them.  Everywhere he could; wearing silk colors his mother sewed for him.  He collected many trophies at county fairs and other venues. Then he moved on to motor-bikes. And other passions.

He graduated from Maroa-Forsyth High School in Maroa, Illinois. He earned varsity letters in football and track.  In an era of leather helmets and no face masks his playing weight was 145 pounds.  He played center on offense when every play was a long snap to a quarterback or halfback in the backfield; and he played safety on defense. He claimed to have invented the safety blitz.  At least among the boys playing on the chalked cow pastures of central Illinois in 1948. He was a proud member of the Maroa-Forsyth Trojans M-club for over 73 years.

His senior year he fell in love with a pretty girl from southern Indiana.  They were married a year later.  He was 18 and she had just turned 17.  In the words of one of their favorite duets: “they married in a fever, hotter than a pepper-sprout.” They also enjoyed jitterbug dancing.  They were happily married for over 51 years.

He graduated from Lincoln College in Lincoln, Illinois and Illinois State University where he was, as he had been in high school, an accomplished stage actor. He took degrees in speech pathology and speech communication. He attended graduate school at the University of Illinois pursuing a Masters Degree in Psychiatric Social Work. He then went to work in the Lincoln State School for Disabled Children. Later he became a speech pathologist for various central Illinois school districts.  He was in fact a one-man special education department.  He served special needs students not just in the school house, but in his own home, or their homes on weekends and evenings.  Most of his students lived on farms, and when the school districts could not pay him for his services, he accepted eggs and chickens and milk from appreciative parents.  Later he taught school at Maroa Illinois, directed the high school drama department, and served as the public address announcer at high school football and basketball games.

Max sought and accepted a job as a consultant to the McGraw-Hill Book Company in 1966.  His area of expertise was childhood reading and spelling pedagogy.  He worked for McGraw-Hill for 25 years and moved his family to Highland, Illinois.  He always marched to a beat of his own drummer. Once riding his bike, unauthorized, at the front of the annual Highland Homecoming parade with handmade signs on his bike that read “Re-elect Byers” on the front, and “Bill Stieb for Mayor” on the back.  He and his bride continued to dance, often frequenting St. Louis dance clubs.  And he liked to play the ponies at Cahokia. And poker wherever he could find a game worthy of his skills.

In later years he returned to Central Illinois and renewed his teaching certificate.  Again, traveling across Central Illinois serving small-town kids whose schools lacked adequate resources to otherwise meet their special needs. To the end of his days, he received heartfelt letters of appreciation from countless children whose lives he touched. Max was a Democrat, and a democrat, and, if not by formal affiliation with any particular church or creed, always a Christian in word and deed.

Max was preceded in death by his wife Mary Helen (Frederick) Scott, his sister Bonnie Burden, his brothers Winfield and J.D., and, most difficulty, his sons Maxie and James.  He is survived by his brother Garett Scott, of Normal, Illinois; his son Thomas Jefferson Scott and wife Betty Lau of Oak Park, Illinois, and granddaughter Ellen Scott and her fiancé Shayne Prapaislip of St. Louis, Missouri; Andrew Scott and his partner Tia Bertrand of Olympia, Washington, granddaughter Elena Scott and her mother Lilia Lopez also of Olympia; and daughter in-law Shari Scott of Ketchikan, Alaska and granddaughter Emma Scott of Cambridge, Massachusetts. And countless nieces and nephews who he loved dearly.

It is not surprising that Max lived to the age of 90 having disciplined himself for many years to live on a strict diet of biscuits and gravy, cigars, and scotch whiskey.

An internment service will be held at a later date at Maroa, Illinois.

To order memorial trees or send flowers to the family in memory of Leslie Scott II, please visit our flower store.