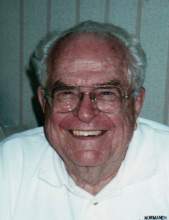 Born March 7, 1922 in Des Plaines, IL. He graduated from Maine Township High School in 1940. Worked at the 1st National Bank in Chicago when he enlisted in the U.S. Army in September of 1942. Sgt. Kruse was a Combat Infantry Medic with the 28th Infantry Division, Landing on Omaha Beach in Normandy, France. Among his medals, he was awarded the Combat Medical Badge, 2 Bronze Stars with Oak Leaf clusters with "V" device for Valor, Silver Battle Star, and Meritorious Service Medal. His unit was awarded the Luxembourg Coix de Guerre.

After his unit was destroyed in the Battle of the Bulge, he was assigned to the 1st French Army and here he was awarded the French Croix de Guerre with Palm, and the French Medaille de la Guerre with Liberation barrette. Sgt. Kruse was invited back for the 50th Anniversary for Liberation of Normandy by the citizens of Normandy. He returned to Europe 9 times to honor and pay respect for his comrades buried in the 8 U.S. military cemeteries where his unit fought for 193 days. He was also honored by many mayors and officials from France and Luxembourg.

Sgt. Kruse was also slated for the Invasion of Japan, but he had enough points to be discharged from the Army in 1945. He is a life member of VFW Post 2149, Veterans of the Battle of the Bulge, American Legion 974, Association Rhin et Danube, The Combat Infantrymen's Association, Inc, and the Veterans of Foreign Wars. During the Korean War he served his country again, this time in the Navy as PNI3.

He returned back to civilian work and met his future wife Margaret E. Adair from Redding, Iowa. They were married in Maywood in 1946 and had 4 children: Thomas (Brenda), Linda (Rakie) Rehkop, the late Richard (Natalie), and Nancy (Duane) Fontana. He was the proud grandpa to 6 grandchildren: Alicia, Troy (Rachel), Jason, Ashley (Adam), Eric, and Kristin (Mark) and 2 great grandchildren, Isabella and Anthony.

Marvin retired from International Harvester after 35 years. He volunteered at the Illinois Railway Museum and was Motorman for various street cars and electric interurbans for over 25 years.

He will be buried at Abraham Lincoln National Cemetery near Joliet, IL.

In lieu of flowers, please donate to the American Legion or the Illinois Railway Museum.