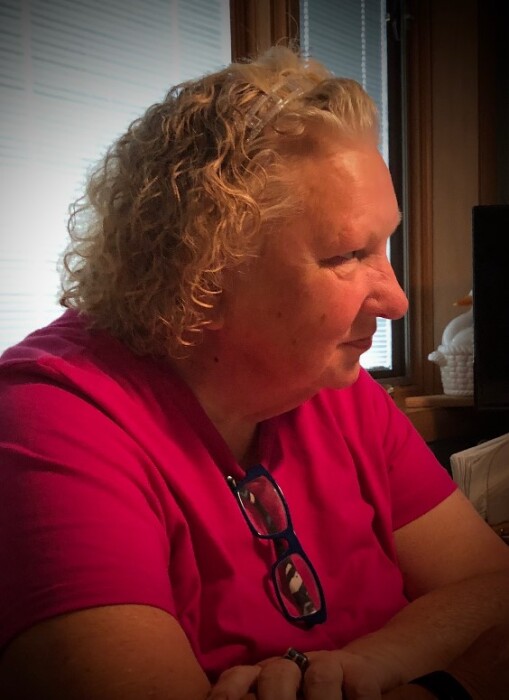 Patrica Forbes was known early in her life as Pat, but to family and friends of her adult years she was Trishy, Trish, or Trisha. She was good at math and good at cooking. She had a fine appreciation for comedy in the everyday, a bear trap memory for jokes, and a sharp wit. Remembered by one of her niece’s friends as “the fun aunt,” Trish kept the people around her on their toes.

One of her friends recalled, “She was fearless. She would try anything. She called me a couple years ago from the top bunk in a youth hostel.” The Miami youth hostel was an ingenious cost-saving device in her winter escape plan--she cruised the Bahamas during the week and retreated to the hostel on weekends. Trish was calling to express indignance because the guy who secured the bottom bunk for himself could not have been more than 25 years old.

While working in Kotzebue, Alaska Trish once drove out of town with co-workers on a nighttime excursion to see the northern lights. When they stopped the car under a truly dark sky, they all got out to look and wait. The others worried out loud about being attacked by wild animals as Trish wandered around the front of the car for space and a better view. The next thing anyone knew, she was screaming “Oh, oh, oh, OOOOOH!” as she fell in the icy, rutted road. She admitted, “I was off work, so of course I wore flip-flops.” Her three, city-raised companions panicked and climbed over each other to get back into the safety of the car as Trish found all her parts and got up out of the road in the wild darkness.

Trisha’s favorite activity was travel. There were cross-country drives with friends to California, Maryland, and Florida; drive-bys of Elvis Presley’s Graceland, in the 60’s and again in the 80’s; and travel to Europe for good eating and cooking classes in Paris. Near the end of her life, she yearned to go back to Paris as well as Yuma, Arizona where tubing on the Colorado River was good.

Trish also traveled professionally. As a reservation agent and airport representative for Apple Travel, she toured resorts in the Caribbean and the Gulf of Mexico. In her later career as a Transportation Security Administration airport screener, she joined the TSA National Deployment Force that responded to staff shortages around the country. On her first assignment, she was deployed to Fort Dodge, Iowa where she lived and worked from October 2003 to April 2004. During that time, she took an interest in the Iowa Caucus and spent days off volunteering for U. S. Representative Dick Gephardt’s presidential campaign. On a later assignment in Nantucket, she met the prevailing candidate from the 2004 Democratic primaries, Senator John Kerry, as he made his way through airport screening.

Trish spent nearly 5 years on the road with TSA serving in Alaska, Colorado, Florida, Hawaii, Iowa, Maine, Massachusetts, Montana, New Jersey, Texas, and Virginia. In 2005 she was working in Washington D.C. when Tai Shan, the National Zoo’s first surviving panda cub was born. Trish transmitted the D.C. panda craze of that summer to her great niece who slept with a plush baby panda for the next 13 years. Her great nephew still sleeps with a 22-inch stuffed lobster toy from her 2008 deployment to Nantucket.

Screening passengers was hard work. Although she was sturdy and strong, Trish often regretted lifting heavy bags by herself into her 60’s to avoid being perceived as someone who needed help. Screening bags for hazards could be stressful and interactions with the public were often tense. Members of the National Deployment Force were deployed to airports for a few days or several months at a time. The work could be full time in a busy airport, or it could be spaced out to support just two or three flights a day. Sometimes the setting was so remote that the nearest extended stay hotel was a 45-minute drive from the work site.

Trish built lasting friendships in this environment. Screeners from around the country met again and again at different airports with the seasonal ebb and flow of passengers. Trish was known for her willingness to whip up a meal anywhere they stayed. In conversations with family, Trish frequently related news from her TSA friends’ lives. Her attachment to these dispersed friends was plain to see. Their good company made the work and inconveniences of the road into an adventure that softened her memory of the grind.

She graduated from Leyden High School in Franklin Park, IL in 1961. In the years before 1980 she lived mostly in southern California where she worked for several years at State Mutual Savings and Loan in Newport Beach, catered parties, and started a home décor business. These were the most fondly remembered times of her life.

In 1980, Trish moved back to her childhood home on Armitage Ave in Melrose Park, IL to care for her ailing mother. While managing ongoing health crises, Trish stayed active in the home décor business.  She and her sister, Margaret, kept a high-energy schedule of regional holiday shows during the craft show boom of the 80’s.

Juanita’s decline rolled out over 19 years until she succumbed to emphysema at the age of 96. Trish and she lived each year for the return of summer – Trish waiting for the end of winter and Juanita waiting for planting season, the Illinois heat, and the summer harvest. They ate well on Trisha’s home cooked food with Juanita enjoying everyday extravagances like half-and-half on her cereal, and eggs for any meal.

After her mother’s death, Trish began a new career with Apple Vacations in Elk Grove, IL. In 2002, she joined the Transportation Security Administration as a passenger screener at O’Hare Airport. In 2003 she joined the TSA National Deployment Force and in 2011 she retired.

Trish died unexpectedly of natural causes at home on May 28, 2020. She was 77 years old. Despite more frequent calls and visits during the COVID-19 Pandemic, no one had a chance to say goodbye. The family gathered for her interment at Mt. Emblem Cemetery in Elmhurst, IL on August 27, 2020. She was a loyal sister and a devoted aunt. Our lives are diminished without her.

Trisha’s life was enriched and supported by a long list of friends and neighbors whom she appreciated freely in conversation with family. In her stead, we her family say to all of you, “Thank you for your affection. For your willingness to listen, laugh, and eat. Thank you for trying new things; the adventures filled a lifetime.”

To order memorial trees or send flowers to the family in memory of Patricia Forbes, please visit our flower store.