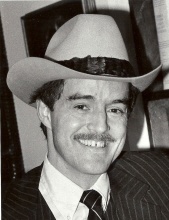 On Tuesday, August 13, 2019, William Terrence Hepp ("Terry"), loving father, brother, and husband, passed away at the age of 72 after a half-century battle with multiple sclerosis.

While living with the burdens of chronic illness, Terry was always looking for the next adventure, the next challenge, the next thing about which to learn. He was a man with a good heart who loved to connect with others. His Catholic faith was important to him and he strived to live it. He enjoyed being the family genealogist, and he was an avid student of history and a political junkie. He remained a lover of horses, cowboys, Native American culture, and all things Western throughout his life.

Terry also had a gift for languages, and he was able to say hello, good-bye, and thank you in over a dozen, as well as speak fluent Spanish. He enjoyed food from all over the world, but particularly Latin American and Japanese cuisine. And he was often admired for his encyclopedic knowledge; as one of his caregivers at Chalet Living and Rehabilitation, where he resided for the last six years of his life, said, "If you can't Google, go ask Mr. Hepp."

Terry was born on April 4, 1947, in Buffalo, New York to William and Mary (Klein) Hepp. He had an idyllic childhood growing up in Buffalo with his younger brother, Timothy, and beloved Springer Spaniel, Major, who accompanied him on his early morning paper route when he turned eleven. Terry was fortunate to attend Canisius High School, which he felt formed his entire life. The school only providing Latin and German languages, Terry taught himself Spanish and set up his own exchange experience in Ecuador.

Terry received an ROTC scholarship from the University of Illinois, Champaign, where he finished his Bachelors' degree in Latin American Studies before achieving a Master's in Political Science. Although passionate about stopping the spread of communism, he was diagnosed with multiple sclerosis after a particularly grueling night of ROTC maneuvers and was honorably discharged from the United States Naval Reserve on April 20, 1967. Terry met his first wife and mother of his son, Christine Bertrand, during his college years, and they were married shortly thereafter.

Terry loved Latin America and dreamed of returning, which he was able to do as a program developer for Catholic Relief Services. Soon after he and Christine moved to Ecuador, their son William Bertrand Hepp ("Bill") was born. After serving two years in Ecuador, Terry went on to work in manpower planning in Buffalo before enrolling at Loyola University School of Law, from which he graduated in 1975. He practiced immigration and criminal defense law in Chicago for twenty-five years, where he was known as the "abogado bilingue, el del sombrero de vaquero" or the "bilingual attorney, the one with the cowboy hat." He was also grateful that he was able to arrange some adoptions dear to his heart.

While he was practicing law and living in Chicago, Terry also adventured with his son, mother, and brother, enjoying ranch and hiking trips in the West, pilgrimages to Medugorje, and more journeys to Mexico and Central America. In 2005, he met his wife Andrea Homier, and they were married on June 17, 2007.

He was preceded in death by his father Bill and his mother Mary, his uncle and aunt, Kevin and Betty Hepp, and his cousin Jane Garver. He is survived by his wife Andrea, his son Bill and daughter-in-law Jodi Taylor, of Ft. Collins, Colorado, his brother and sister-in-law Timothy and Elizabeth Hepp and their son Colin, of Denver, Colorado, numerous cousins, his mother-in-law Joanne Homier, his sister-in-law Nancy Homier, both of Helena, Montana, and his brothers-in-law Brad Homier and Nate Homier, of Tooele, Utah and Helena, Montana.